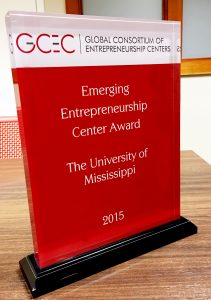 The University of Mississippi CIE shared the first-place win with the Hunter Centre for Entrepreneurship and Innovation at the University of Calgary in Alberta, Calgary, Canada. This was the CIE’s first time to compete for the award.

“We are so excited to bring this award back to the University of Mississippi,” said Rich Gentry, Director of the center. “The GCEC conference had over 300 delegates from centers around the world and it was a great thrill to have our program endorsed by this group in such a profound and public way.”

Award recipients participated in a multi-round judging process that began in July and concluded this past week. Each applying center had to be nominated, and a five-page description of the centers’ goals and programs had to be submitted to the judging committee. For the Emerging Entrepreneurship Center Award, the nominated centers had to be less than 5 years old.

“In the two years since the center was established, we have been working tirelessly to bring a world-class program to Ole Miss;” explained Gentry. “We’ve got a lot of work to do still, but this awards says to me that we’re on the right track.”

The Global Consortium of Entrepreneurship Centers, established in 1997, was developed in order to facilitate communication and collaboration between entrepreneurship centers and is comprised of members from almost 300 universities from the United States and other countries. The international consortium hosted its largest conference to date, with approximately 340 university and college representatives present.

Dedicated to the success of student entrepreneurs at the university, the CIE was developed to inspire students to create innovative businesses and enhance the economic value of all businesses within the state of Mississippi. The CIE is an independent program that runs in conjunction with the Ole Miss School of Business Administration.